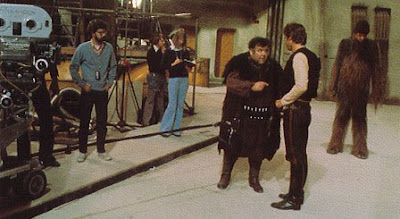 Jabba the Hut and a half-dozen grisly alien pirates and purple creatures stand in the middle of the docking bay. Jabba is the grossest of the slavering hulks and his scarred face is a grimtestimonial to his prowess as a vicious killer. He is a fat, slug-like creature with eyes on extended feelers and a hugeugly mouth.
JABBA : Come on out, Solo !
A voice from directly behind the pirates startles them and they turn around to see Han Solo and the giant Wookiee,Chewbacca, standing behind them with no weapons in sight.
HAN : I've been waiting for you, Jabba.
JABBA : I expected you would be.
HAN : I'm not the type to run.
JABBA : (fatherly-smooth) Han, my boy, there are times when you disappoint me...Why haven't you paid me ? And why did you have to fry poor Greedo like that... after all we've been through together.
HAN : You sent Greedo to blast me.
JABBA : (mock surprise) Han, why you're the best smuggler in the business. You're too valuable to fry. He was only relaying my concern at your delays. He wasn't going to blast you.
HAN : I think he thought he was. Next time don't send one of those twerps. If you've got something to say to me, come see me yourself.
JABBA : Han, Han! If only you hadn't had to dump that shipment ofspice...you understand I just can't make an exception. Where would I be if every pilot who smuggled for me dumped their shipment at the first sign of an Imperial starship? It's not good business.
HAN : You know, even I get boarded sometimes, Jabba. I had no choice,but I've got a charter now and I can pay you back, plus a little extra. I just need some more time.
JABBA : (to his men) Put your blasters away. Han, my boy, I'm only doing this because you're the best and I need you. So, for an extra,say twenty percent I'll give you a little more time... but this is it.If you disappoint me again, I'll put a price on your head so large youwon't be able to go near a civilized system for the rest of your short life.
HAN : Jabba, I'll pay you because it's my pleasure.
# posted by damoon @ 22.12.08